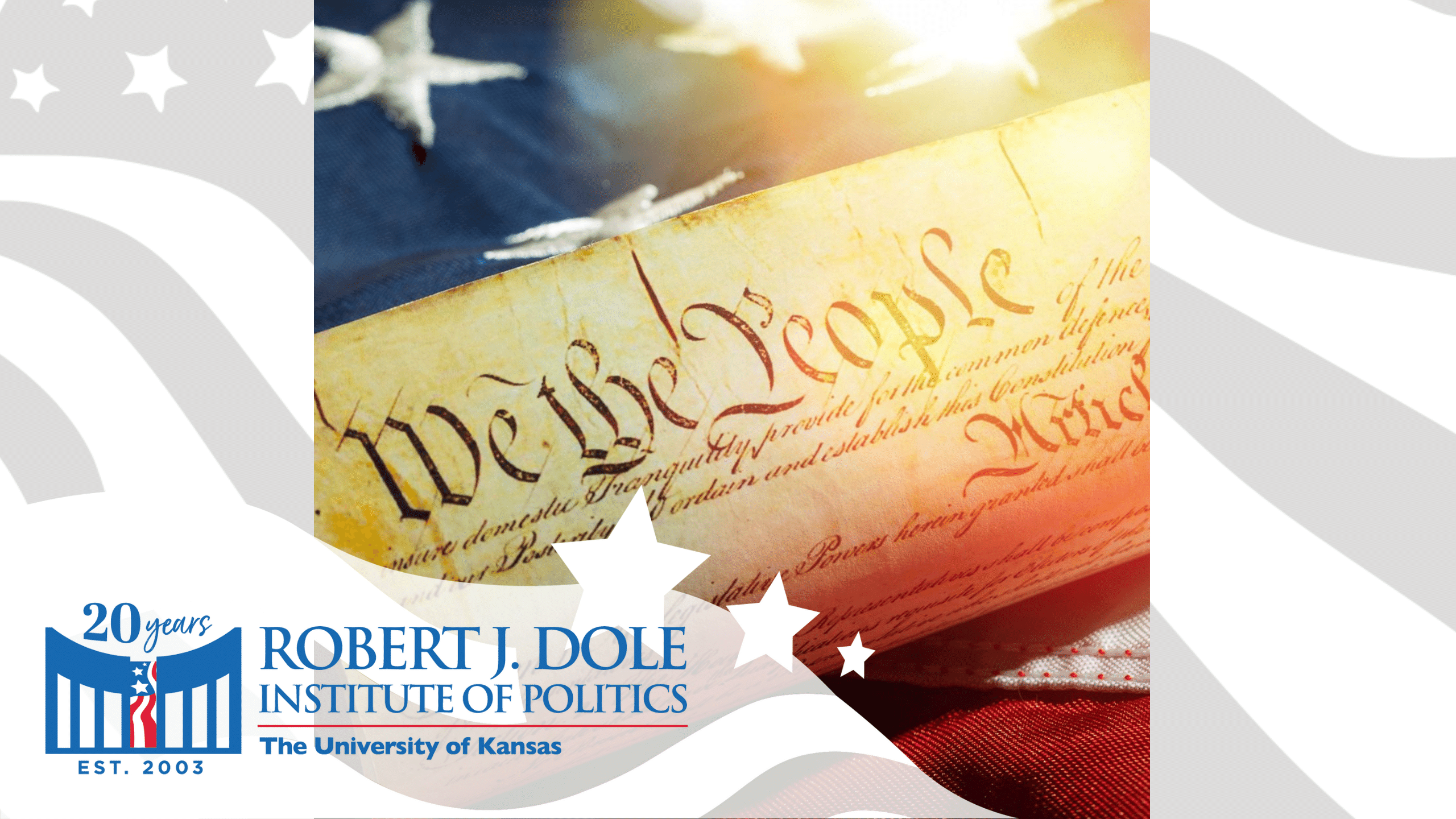 KU fans are invited to recite the Preamble to the Constitution before the Jayhawks face their opponents. This is also Family Weekend. The Preamble will be displayed on the video board in the stadium. Chancellor Douglas Girod will lead the recitation while Elizabeth Berghout, carillonneur, rings the bells from the Campanile. Following the Preamble, the Marching Jayhawks will play the national anthem.

Annual Constitution Day Program at the Dole Institute of Politics

The Dole Institute of Politics presents: Recent Constitutional Law and the Impact on Kansas Politics

Kannon Shanmugam is a partner at the law firm of Paul, Weiss, Rifkind, Wharton & Garrison. He is chair of the firm’s Supreme Court and appellate litigation practice and managing partner of the Washington office. Kannon is widely recognized as one of the nation’s top appellate litigators. He has argued 34 cases before the Supreme Court. In all, he has argued over 100 appeals in courts across the country including arguments in all thirteen federal courts of appeals in numerous state courts. Prior to private practice, Kannon served as an Assistant to the Solicitor General at the U.S. Department of Justice. He also served as a law clerk to Supreme Court Justice Antonin Scalia and to Judge J. Michael Luttig of the U.S. Court of Appeals for the Fourth Circuit.

Paul Davis is a graduate of the University of Kansas and the Washburn University School of Law. He practices law with the Paul Davis Law Firm, LLC here in Lawrence and with the Topeka law firm of Frieden & Forbes, LLP.  Davis is a lifelong resident of Lawrence and served in the Kansas House of Representatives from 2003-2015. He served as the House Minority Leader from 2009-2015, where he developed a reputation for building bi-partisan coalitions on numerous issues. In 2014, Davis was the Democratic candidate for Kansas Governor where he was endorsed by over 100 current and former Republican elected officials. Davis ran for the United States Congress in 2018 where he lost by less than one percent in a district that President Trump carried by 19 points in 2016. Davis has been involved in numerous local, statewide, and national organizations, and currently serves as the Co-Chair of Economic Lifelines, which is a statewide transportation advocacy organization.

Earl B. Shurtz Research Professor of Law University of Kansas School of Law

Lumen “Lou” Mulligan joined the KU Law faculty in 2010, where he teaches predominantly civil litigation courses. In the ensuing years, KU Law students have recognized Lumen for his teaching several times, including awarding him the Dean Frederick J. Moreau teaching and mentoring award, selecting him to serve as their graduation hooder, and as their commencement marshal. He was named as an Earl B. Shurtz Research Professor in 2019.

Lumen has authored or co-authored four books and treatises on jurisdiction and procedure. He publishes in prominent legal journals as well, including articles in the Michigan, NYU, Northwestern University, Washington University, UCLA, and Vanderbilt Law Reviews.  State and federal courts at all levels cite Lumen’s scholarship regularly.  He served as a visiting professor at the University of Aberdeen, Scotland in 2014.

Lumen oversees KU Law’s Medical-Legal Partnerships, which aid low-income clients and provide law students with field placement experiences, at both Lawrence Memorial Hospital and the KU Hospital in Kansas City.  He formerly served as the director of the Shook, Hardy & Bacon Center for Excellence in     Advocacy. He also served as associate dean for faculty from 2016 to 2019.

In addition to his duties at KU Law, Lumen served, or continues to serve, on the Kansas Judicial Council – Civil Rules Advisory Committee, the executive committee of the appellate section of the Kansas Bar Association, the U.S. Tenth Circuit Court of Appeal Criminal Justice Act Panel, the board of directors for      Kansas Legal Services, and the Kansas Court of Appeals Mediation Study committee. Lumen frequently offers testimony to the Kansas legislature as well.  He continues with representation in court, most often in an amicus curia or pro bono capacity.

Prior to coming to KU Law, Lumen was an associate professor at Michigan State University College of Law.  He served as a judicial clerk on the U.S. Court of Appeals for the 10th Circuit.