From the Past, a Leadership Legacy for the Future 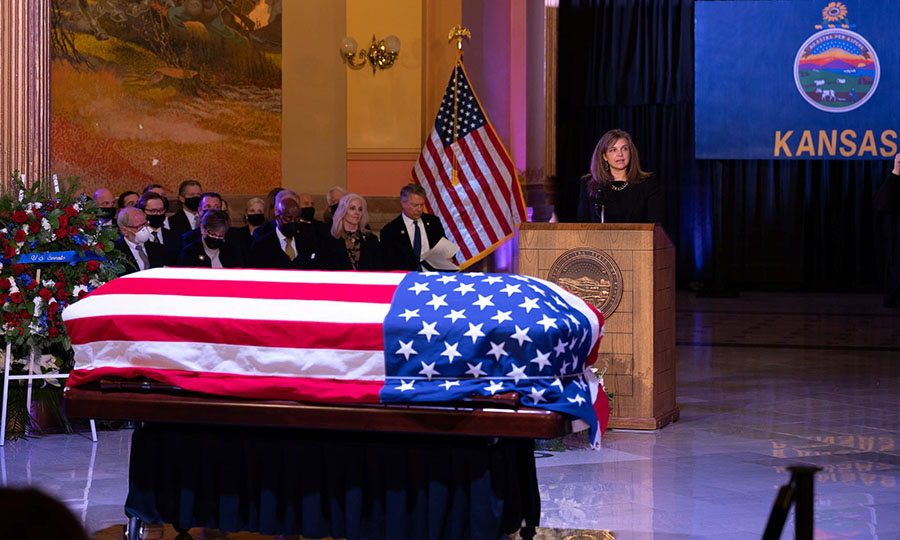 December 5 marks one year since the passing of one of America’s greatest statemen, Senator Bob Dole.

In a time when bipartisan cooperation is an innovation rather than an empirical norm, we’re left with the historical examples. It’s instructive to remember that Senator Dole reached the height of power and influence through dealmaking – shepherding nuanced, compromise legislative solutions into law and building a future-oriented consensus.

In honor of him, and fortunately for us, the values that produced these compromises are still alive and well at the University of Kansas’ Dole Institute of Politics. Since 2003, the Dole Institute has promoted civility, bipartisanship, and public service – elements of human character made institutional mission.

As a witness and participant in Senator Dole’s memorial services last year, another of his defining qualities prevailed among the public remarks and personal conversations: his optimism, a posture not always present but well-considered and hard-fought.

Optimism has been a hard sell of late to students on college campuses, and all of us beyond, conjuring either willful obliviousness or a delusion excusing norm-destroying behavior. But the optimism Dole came to know was constructive, centering the belief beyond all doubt that he – and you, and I – possessed the power to surmount the day’s challenges together and regardless of political difference. Partisanship being a means, not an end.

Several weeks ago, among an already busy slate of engagement opportunities for young people, the Dole Institute hosted a student exchange between KU students, largely Kansan and Midwestern, with a group of students from Harvard Kennedy School’s Institute of Politics for conversation about political polarization, political participation, and democracy’s future in this country. Twelve undergraduate students of different places, backgrounds, and beliefs dedicated their weekend to one another, deliberating actionable steps to address what comes next for our country. Those of us who had the privilege to witness this next generation – their smarts, compassion, earnestness of purpose – would be forgiven our optimism for our nation’s future.

The 118th Congress will convene in January, and again arrives the opportunity for a new cohort of leaders to turn from bitter partisanship toward compromise and consensus. That expectation might seem unreasonable given our political climate, but as the mid-term election results showed, the electorate is ready for a change in tone.

In this way perhaps the past is again an inspiration. More than a quarter-century ago Senator Dole accepted the Republican nomination for President with a speech that closed in these words:

Optimism is in our blood. I know this as few others can. There once was a time when I doubted the future. But I have learned as many of you have learned that obstacles can be overcome.

And I have unlimited confidence in the wisdom of our people and the future of our country.

Tonight, I stand before you tested by adversity, made sensitive by hardship, a fighter by principle, and the most optimistic man in America.

My life is proof that America is a land without limits. And with my feet on the ground and my heart filled with hope, I put my faith in you and in the God who loves us all.

For I am convinced that America’s best days are yet to come.

We don’t typically look for the next wave of the future in institutions, which tend to be about as revolutionary as nostalgia for a receding past. But at their best, when reflecting human nature’s finest qualities, they are both an essential foundation of and sustaining nourishment for an enduring democratic society.

On a sad day for so many, how fortunate we are that Senator Dole’s legacy still lives through a thriving institution dedicated to the only kind of leadership that will secure our country’s future.

Audrey Coleman is director of the Robert J. Dole Institute of Politics at the University of Kansas in Lawrence, Kansas.