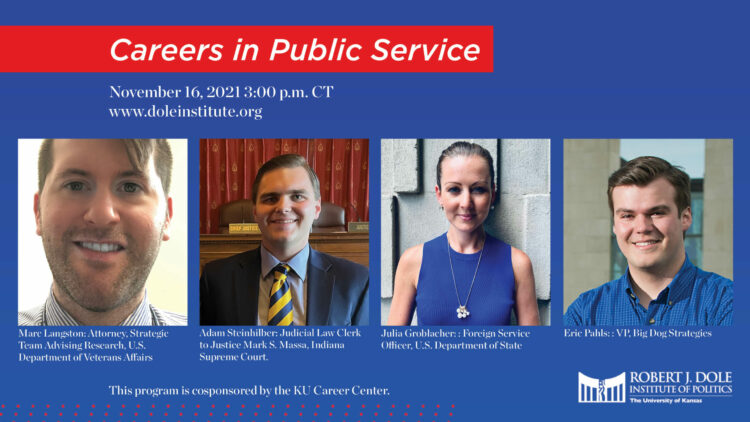 The Dole Institute of Politics invites you to join us for an online panel discussion on careers in public service featuring four former Dole Student Advisory Board members.

After graduating from KU in 2010, Julia received her Masters in Public Policy from the Harvard JFK School of Government.  Since entering the Foreign Service in 2012, Julia has served domestically on the Syria and Afghanistan desks, and overseas at the U.S. embassies in Moscow, Baghdad, and Kabul. She most recently served as a member of Deputy Secretary Wendy Sherman’s staff, responsible for the Middle East, counterterrorism, cybersecurity, and tech.  She will soon depart for U.S. Embassy Beirut.

Marc Langston is a Wichita native and KU alumnus (’08) with bachelors degrees in political science and art history. He attended law school at Wake Forest University and spent the last decade working as an attorney in Washington, DC. Marc’s legal experience includes a variety of positions in both the public and private sectors.

Eric Pahls is a proud native Kansan who served as Campaign Manager for Dr. Roger Marshall’s successful 2020 U.S. Senate Campaign. Prior to 2020, he served as businesswoman Carly Fiorina’s Communications Director, and as the youngest Press Secretary on Capitol Hill after working on Dr. Marshall’s successful 2016 Congressional campaign, which notably unseated the incumbent in a primary. Eric is a graduate of the University of Kansas’ William Allen White School of Journalism and Mass Communications, and lives in Kansas City, Kansas.