THE COUNSELORS | Resolved: Cash bail will not be required for individuals who are not a flight risk or dangerous 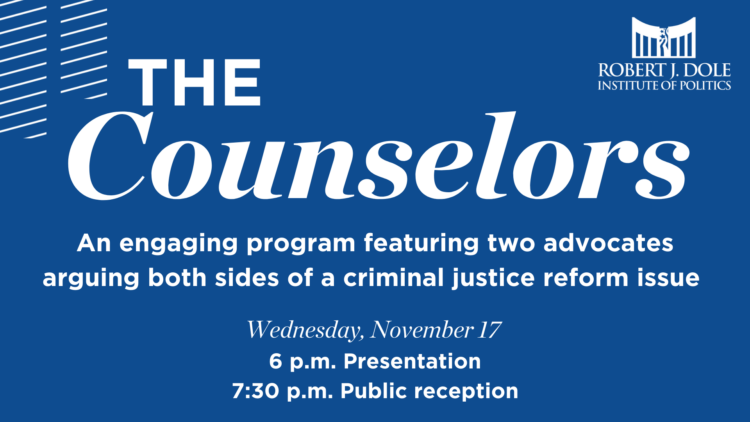 On Nov. 17, the Dole Institute of Politics will debut The Counselors, an engaging series featuring two advocates arguing either side of an important national issue. In a cross between a courtroom trial and a debate, the two counselors will present their opposing arguments and call two expert witnesses each to help build their case.

Focusing on criminal justice reform, the theme for our November program is “Resolved: Cash bail will not be required for individuals who are not a flight risk or dangerous.”

The counselors for “Resolved” will be Edward C. Duckers, partner at Stoel Rives LLP and head of the firm’s Litigation Practice, and Pedro L. Irigonegaray, attorney and partner at Irigonegaray, Turney, & Revenaugh.

Today in the United States, six out of every 10 people in jail are currently awaiting trial without having actually been convicted of a crime. In 2018, the bipartisan FIRST STEP Act was signed into law, creating legislation that would improve fairness in sentencing of federal crimes, reduce recidivism and promote public safety.

At a time when a range of experts are calling for additional criminal justice reform, The Counselors fall program aims to educate on both sides of the argument.

Join us 6-8 p.m. on Wednesday, Nov. 17, for the inaugural event followed by an open house reception.

The Counselors series is consistent with the mission of the Dole Institute of Politics – to promote political and civic participation as well as civil discourse in a bi-partisan, balanced manner – and is made possible through a grant from the Koch Family Foundation.

This program is cosponsored by KU Debate and the University of Kansas School of Law.