Exhibit: What Would a Woman Offer Her Country? Elizabeth Dole’s Ground-breaking, Trail-blazing Life of Service 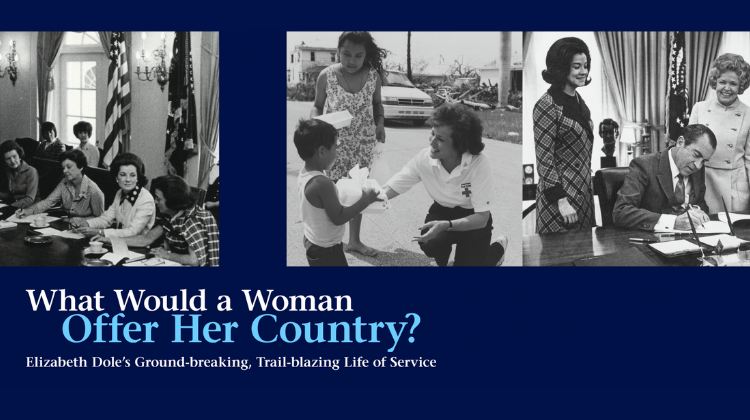 After several decades of leadership at the highest levels of U.S. government, Elizabeth Dole asked and answered this pointed question in a 1999 speech she delivered while she contemplated a run for the U.S.presidency. The following year, she became the first viable woman candidate from a major political party to seek our nation’s highest office. As one of just 24 women in her 1965 Harvard Law School class of 550, Senator Dole went on to serve five U.S. presidents and became the first woman to serve in two different positions in two presidential cabinets. She was the first woman head of the American Red Cross since founder Clara Barton in 1881, and later was elected the first woman U.S. Senator from North Carolina. In 2012, she established the Elizabeth Dole Foundation to adress military families’ urgent support needs. It has since become the country’s preeminent organization that empowers, supports, and honors military and veteran caregivers. Aside from these historic firsts, what has Senator Elizabeth Dole offered her county? This exhibit, featuring items from her historical collections which she donated to the Dole Institute in 2017, chronicles over six decades of people-focused leadership and policy making – all while breaking barriers and blazing trails for other women to follow in her footsteps.